The Real Housewife of NJ Experiment


The weirdest thing about moving to the city from the country is timing. Everything is delayed if you live a city life.
For one, people get married later. While my 25-year-old friends at home are getting engaged and married, my New York friends, for the most part, are waiting until they're in the 27/28 range (however, they still live together "in sin" as my family reminded me yesterday).
Kids are an entirely different story. There are a bunch of people at home with kids, but I don't know even one city friend planning to have a baby anytime soon. Mainly because we live in teeny apartments. Where would we put a child? My boyfriend said we'd have to hand the kid a blanket and say, "There's the couch. Good luck."
I don't know of anyone willing to move to Scarsdale or Greenwich, CT. That's where our bosses live. We still like to go out until 4am and a child would absolutely prevent that. Okay actually in reality, I don't go out late very often, because I prefer to not be hungover all day, but still. There are times (weddings, birthdays, random Fridays)  when we still like to go out. Also sometimes we like to blast Linkin Park or Kokomo in the mini apartment, and that would wake a sleeping baby for sure. We don't live very close to family and obviously our city friends wouldn't know how to babysit. Who would help us raise a child? Google? How would that happen? Would I have to quit my job to stay home with it or would I have to get a nanny? Or send it to daycare? How would we pay for a nanny and a child, when I struggle to pay the $1K rent a month? I can't imagine there are any decent daycares in Jersey City and how would I find a nanny I can trust? Let's say I stay at home. Would I resent it? Would I be afraid of not being able to support myself? Would the dad be able to support two people and pay rent and still be a relaxed and happy person?
I did an experiment today. I was off for the dumbest holiday ever, Columbus Day, and my boyfriend had to work.
So I pretended to be a housewife. Naturally. 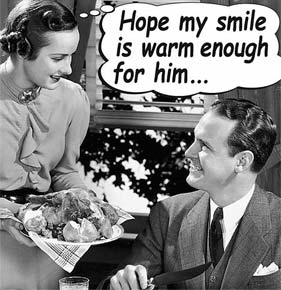 I woke up late, made some fresh coffee from beans I ground myself, and then dusted, scrubbed, cleaned, and vacuumed for five hours. In stilettos and a dress. Okay not really, I cleaned in pajamas.
I took an hour-long break to chat to my LA friend about our new blog. (Perhaps I'm a stay-at-home lady who gets paid to blog). After the cleaning and laundry, I took my canvas bags and went to the farmer's market. I picked up some mini baby pumpkins to decorate my mini apartment and some fresh green beans for dinner. I figured I would Google how to prepare them. Then I went to Duane Reade for laundry detergent and yogurt, followed by the Asian bodega for chicken broth and a lemon. I called my little sister to see what she was up to (watching Gossip Girl online instead of studying = another future housewife). Upon arrival at my so fresh and so clean apartment, I started making dinner for my breadwinning, heartwinning boyfriend. His favorite thing I ever made is Sunday Chicken. It's Monday, so I made Monday Chicken (same recipe). The prep time is about 1.5 hours. It has to brown, simmer, and bake in lots of wine and butter (the two keys to happiness). I learned that you must cut off both ends of the green bean and rinse and then boil in salted water for five minutes. No problem. I was doing so well that I turned on some Classic Rock and lit a candle. My lighters are missing (stolen), so I used a match for the first time ever, no joke. Sometimes a housewife has to man up. I also made rice, the 20 minute, real, Uncle Ben's kind, none of that boil in a bag crap. I also made homemade iced tea, with two regular tea bags and a Green Tea citrus one for good measure.
The boyfriend arrived home with his briefcase just as the timer went off. He hung his hat and cloak, gave me a steamy kiss, and then sat at the table with his newspaper. Fine, it was actually ESPN on his computer and he hovered in the kitchen for a bit. Dinner was a success, except he choked on the rice and didn't like the citrus green tea. He noticed that I vacuumed though, which was nice. And he went to the common area of the building to watch football so I could write. What a darling.
All I know is that I have absolutely no energy to do the dishes, my feet hurt, and my back hurts from all the cleaning and slaving away all day. I'm a desperate housewife, and I need a dirty martini. Being a housewife isn't easy. I can't even imagine what it would be like to be a stay-at-home Mom. I'd definitely need to hire a housewife also. Tomorrow I'm going back to work, and perhaps I'll appreciate my 8 hours in a chair a bit more. It might be better than cleaning the toilet and getting splashed with boiling butter, especially if there was a screaming child in the background. DINK for life, or at least for now.
at 6:15 PM